In an apparent move to appeal to the millennial market, Coke has unveiled a new look for Diet Coke.  And, they didn't stop there.  Along with the rebranding came four new flavors:  Ginger Lime, Twisted Mango, Zesty Blood Orange and Feisty Cherry.  Each product is now housed within a sleek new can design to give Diet Coke a youthful appearance.

The initial responses suggest that Coke is simply jumping on the bandwagon with flavored diet beverage options packaged like many others already on the market.  In fact, not only are other carbonated beverages using sleek can designs, but so are alcoholic beverages that have been doing so for a while.

It will be interesting to see how the overall market responds to this new look...and new flavors.  Originally introduced to the market in 1982, Diet Coke today is no longer your father's Oldsmobile!

Feel free to share this on your favorite social media sites and email it to a colleague or friend.

Pitchman Billy Mays revolutionized direct response advertising via his unmistakable commercial presence that always opened with “Hi, Billy Mays here…”He became the icon of direct response television commercials and infomercials.What’s interesting is the effectiveness of his pitches that resulted in the sales of millions of dollars of product.

This brings up the question:was Billy Mays really the brand or was it the product he was selling?His products certainly have become household brand names – OxiClean, Orange Glo, Awesome Auger, Mighty Putty, etc.But, without Billy Mays these arguably would be unknown.However, having a strong pitch for a product is just one aspect to building an effective brand – it has to work and be well received by the consumer.If these products didn’t deliver on their brand promises as Billy demonstrated in his commercials, additional sales would likely have never happened.Still, with a guy like Mays and his notoriety representing the products, one could make a strong case that he is more of the brand than anything else.He is the voice, the image, the seller, the convincer – the guy who compels the sale.That’s more than just a sales guy.

It is very difficult to think about any of these brand names without the name and image of Billy Mays coming to mind at the same time. What happens now? His commercials continue to be aired since his death and unquestionably the products are selling. Over time, will they sustain without Billy Mays? Have the brands built a strong enough following to succeed without their pitchman? Only time will tell us how these products will perform sales-wise in the future and whether or not they can live on without their beloved spokesperson.

Yep, it appears Denny's is at it again. They must be on to something that is working. A new advertisement is launching to promote another free meal for their Grand Slamwich. As they did during the Super Bowl ad, Denny's will be offering a freebie to those who bring a friend who could use a good meal. The idea is to promote 'acts of kindness'. A good idea, no doubt, and one that will continue to boost their already high brand favorability. 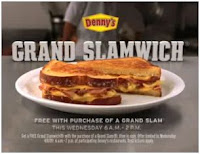 Some may be asking why they would bother with another free offer. In marketing, there is no more powerful word than 'free'. And, it works. It's obviously working for Denny's because they wouldn't bother investing in another promotion of this type if the first had been unsuccessful. Plus, they understand the importance of consistency. The Super Bowl promo could have easily been a one-off, one-time deal that we soon forgot about. But, no, the marketing pros at Denny's recognize that and are ready to pull the trigger again. When this ad hits, there will be many consumers who recall the Super Bowl promotion and thousands upon thousands who will recall excellent service and quality food when they partook of the free Grand Slam meal back in February.

This is likely to create a lot of additional buzz for Denny's. That's only part of what they're after. It is the buzz that translates into revenue dollars that will be the real measure. I'm betting they'll please a lot of hungry patrons while bringing a smile to the company's bottom line.

As if the Super Bowl wasn't enough, Denny's stepped up to the plate and smacked one right out of the park...or was it through the uprights?! Through their :30 second advertising spot during the Super Bowl, Denny's promoted their free Grand Slam breakfast at all US restaurants from 6AM till 2PM on the Tuesday following super Sunday.

Sure, Super Bowl ads are ultra expensive, but when you consider the nearly immediate call to action that Denny's promoted, the pay-off was sure to follow. And that's what happened. People came, a lot of them waited patiently in long lines, they ate, were satisfied...and then what? Well, the real ROI for Denny's is the bet that these people will come back and become loyal patrons to the restaurant.

That's one of the keys to this campaign. Denny's advertising message was put in front of millions of people - mass communication. But, they hit a hot button with the viewing audience - free. Who can beat that these days? A free meal, sure. More than that, they drew people into their restaurants - perhaps some for the first time. Once they came, Denny's had to deliver. Service had to be spot-on. The food quality had to be tops. The customer experience had to be superb.

Well, based on the reviews, it looks like the free Grand Slam was a winner. When Denny's statistically measures their spike in meals served over the coming weeks, they should see increased revenues. The key will be keeping these customers and converting them into loyal patrons. Otherwise, they risk the short-term enjoyment of a sharp revenue increase that could easily drop back down to previous levels.

It's amazing how much we put up with in this world that simply isn't worthwhile. Take advertising for instance. How many times have you been offended by advertisers making wild assumptions about your preferences? Do they really know you? And what about bombarding you with unwelcome messages over and over again? When you've had enough, it seems a sign like this may be appropriate:

Wouldn't it be nice if marketers took the time to know their potential buyers before making broad generalizations or assumptions about you? And think about the effect this would have on their marketing execution. Creative is great and cleverness has its place, but making a strong connection to a buyer is key. Demonstrating that your product or services will easily solve a problem or efficiently address an issue is the objective of your marketing.

Don't play games and don't fall into the trap of pestering your market. If you do, you'll quickly find that you're not welcome!

Instead, be tactful and strategic. Pinpoint where you need to distribute your messaging and promotions. And, do it in such a manner that it is well received - consistently hitting the mark. You'll soon find that such an approach will prove to work well and help grow your business.

Football season is now upon us and already the college football faithful have been treated to some unbelievable games. Fresh on all of our minds is the major upset that Appalachian State pulled off against powerhouse Michigan. The headline pretty much said it all: 'One and Done'. That's a powerful headline and it sums up the situation for Michigan very well - they played one game, lost it and with that their dreams of a national championship.

Think about the power of headlines as they related to your marketing efforts. Are they meaningful? Do they stop the reader in that 2-3 second slot of time you have to capture their attention? Your goal is to make a very quick connection with the reader or passerby who says 'wait a second...what is this?' The body copy and graphics then work together in harmony to effectively tell your story - but with precision and crispness - to lead the reader to a call for action.

While attending a recent college football game in a famous stadium known in the Southeast as Death Valley, I couldn't help but find my attention drawn to the big, bright, flashing advertisements and promos running along the border between the upper and lower decks. What I found fascinating was the lack of any message. In all fairness, most of these high-dollar sponsors had some local brand recognition so this was definitely positive reinforcement. But for those 'me too' guys who spent who knows how much to have their logos animated in neon - - well, I'd really like to know their ROI. No web address, no solution bullet listing - - just a flashy logo in front of 83,000 people who were given no reason to check these guys out.

Have purpose when you advertise. Do it with a goal and solid objective in mind. Don't be one of these people that wonders six months from now why their big dollar stadium advertising went no where. Instead, approach it with purpose like a true business winner!

Who doesn't remember the 1979 Coke commercial featuring the Pittsburgh Steelers 'Mean Joe Greene'? Yeah, the one where he guzzles a Coke and in appreciation (instead of a major burp) tosses the kid his game jersey to the line of 'Hey kid, catch'. Oh how this delighted TV viewing audiences for what seemed like forever. The commercial won all kind of awards and is noted as one of the most popular television commercials of all time.

So how successful was this commercial? The creative guys and ad agencies would all quickly thump their chests and proclaim this a heart warming moment where 'football giant makes happiest day of small boy's life.' And in the center of the spotlight is our favorite soft drink brand - Coke. Ahh. How nice. Hey, I'm not knocking it. This remains a fantastic commercial memory. 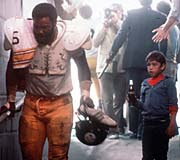 But did you know Coke jerked that commercial off the air the moment it failed to produce additional sales? They didn't keep it aired just to satisfy consumer fluffiness. No sir. Instead, they took a business approach and determined based on measurement and ROI that the commercial had run its course in driving additional revenue for Coke. Sergio Zyman - then Chief Marketing Officer for Coke - now head of Zyman Group - pulled the plug.

Think about that. Unless your marketing dollars - - whether advertising or other - - are tied to new business and additional revenue, it's probably a really good idea to scrutinize what those dollars are accomplishing for you.

Marketing is an investment. And, investments are supposed to yield favorable returns. Mean Joe Greene turned 'softee' in that famous Coke commercial for just a few seconds. In reality, it was the Coca Cola Company who avoided the trap and made the right business decision to move on.