When Zack Johnson landed his tee shot on the 16th green in the third round of the Masters, he was thinking possible birdie; par worse case. Three putts later, the golf professional left with a shocking bogey. Johnson could have made a huge issue out of this mental lapse, but instead he forged ahead.

Then, in the final round, Johnson found himself atop the leaderboard. He had to be thinking 'man, I was just a visitor here a few years ago...now look...' Lurking just a few holes behind him was the number one golfer in the world, Tiger Woods, who is known for snatching victory out of the hands of the lesser knowns. Johnson would have none of that as his steely eyes maintained a constant focus on playing his game.

After slipping on the coveted green jacket, reality set in for Johnson - he had just staged off his competition to win one of the golf's most prestigious events. 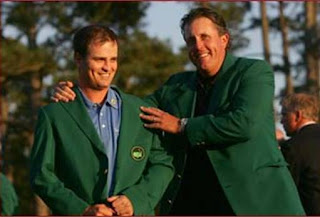 In business, we often need to have a focus like Zack Johnson demonstrated in his victory at Augusta. If we lose sight of our objective for a moment, we too, may walk away from a certain opportunity with utter disappointment. It can happen fast and sometimes before we recognize it.

Competitors can be vicious and stealth-like. Take Zack Johnson's example and keep your eye on winning the prize. No doubt, that green jacket must have felt great.