On a trip to the coast last fall, I observed a fisherman that to me appeared to know what he was doing. He arrived on the beach and proceeded to mark his spot, prepare bait and set his pole with high hopes of landing 'the big one'. I watched out of curiosity as he cast his rod then waited patiently for a bite on the end of the line. Sure enough, he had action in no time. From my vantage point and distance from him, it was difficult to see exactly what he caught, but I did witness a few 'keepers'. At the same time, there were definitely some 'throw backs'. 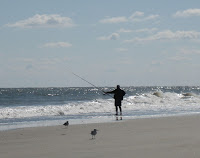 As this scene unfolded, it reminded me of how many companies approach their marketing. The intentions are normally good, but sometimes the strategy and execution are lacking. Simply casting your marketing dollars into the blue abyss hoping for a big bite is a high risk and expensive venture. It's essentially the same as mass communication with the intention of reeling in perhaps only a select few keepers. The bait and rod may be right and even the blue waters where those prospects are looming, but tossing a 'hook' for anyone to snag probably isn't the best approach.

Wouldn't you have a much better opportunity of success by identifying who you want to send your message to, tailoring it to their needs and then executing a plan that properly connects with them? Such an approach is targeted and strategic to maximize your marketing investment and efforts.

Think about that the next time you're tempted to bait your hook before tossing it to the masses.